The Rock Rolls The Blues, Roasts The Rest 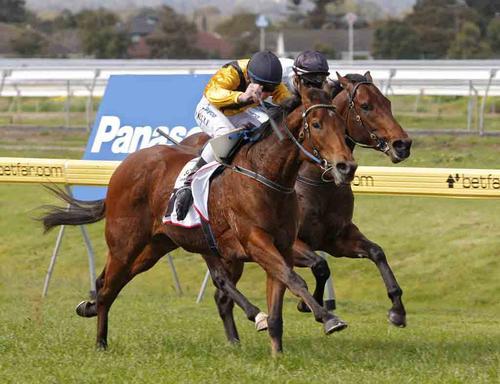 A touch of tactical genius from Mark Minervini enabled smart 3 year old Addiction To Rock to notch his second consecutive win in the 3 year old 0-75 handicap over 1250 metres at Morphettville Parks yesterday.

Followers of Mark Minervini will know that after Addiction To Rock's easy win at Gawler on 18 August 2010, his connections had intended his next run would be in early September over 1400 metres. However, in light of the recent and upcoming schedule of 3 year old races, Minervini had a hunch that yesterday's race may be a little light on for numbers and quality and nominated Addiction To Rock for Saturday's race. And so it turned out, with only 6 runners making their way to the starting gates.

The other smart ploy on Minervini's part was to engage the services of young 3 kg claiming apprentice, Jacob Rule, to provide "The Rock" with some helpful, and (as it turned out) decisive, weight relief.

On paper, the race looked a fair dinkum match race between Addiction To Rock and expensive Hayes youngster The Blues, with punters installing Addiction To Rock a very slight favourite at $2.30 from The Blues at $2.60. Again, this went to script as Addiction To Rock sat outside The Blues, which led, and the 2 horses appeared to have the race between them from almost the moment they jumped. They matched strides for basically the entire race and although race caller Terry McAuliffe had suggested The Blues may have had a little more to give as these 2 horses straightened for home, Addiction To Rock dug deep and pulled away in the last 50 metres to win by a half-length, with the third placed horse more than a further 4 lengths away.

Addiction To Rock was a $40,000 Magic Millions purchase as a yearling and after only 4 starts has already topped $50,000 in prizemoney, giving his many first time owners a big thrill and a quick return on their outlay.

Based on yesterday's win, more wins look in store for Addiction To Rock. One thing is for sure – he will again be placed perfectly by Mark Minervini when he looks to bring up a hat-trick of wins.