Mimiele A Maiden No Longer 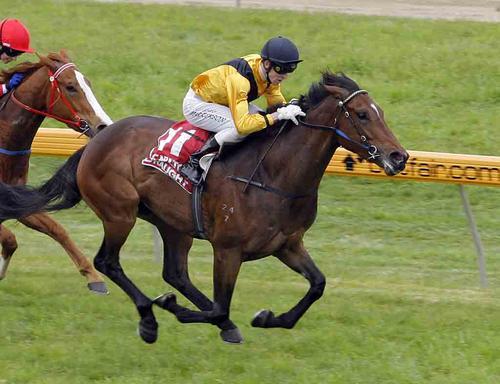 After having performed creditably behind Becerra and Sayahailmary at stakes level last start, Mimiele appreciated yesterday's significant drop in class. Ridden by Adrian Patterson, Mimiele settled on the speed and raced away from her rivals over the last 200 metres to record an easy victory. This win looks likely to be the first of many for this filly by Barely A Moment.

Mimiele was selected and purchased by popular media identity Richard Zachariah at the 2009 Adelaide Magic Millions sale, he races Mimiele with his partner Sarah Hyde, the fillies' win was Mark Minervini's 5th win for the season from only 20 runners, an excellent strike rate.

Minervini's recent run of hot form looks set to continue as he saddles up strong chances, Addiction To Rock and Andronica, at Morphettville Parks on Sunday afternoon.