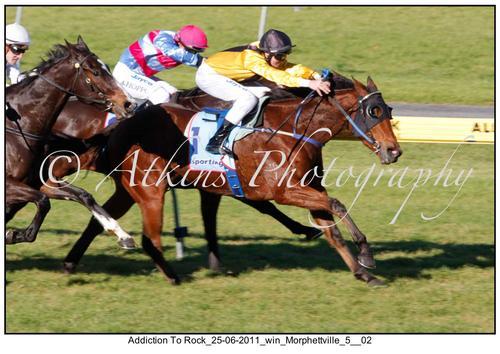 Addiction To Rock looked a picture of health in the yard and his connections were quietly confident of a forward showing in his first start for just on 3 months, their confidence having been buoyed by a solid hit-out in a recent trial. While The Rock entered the thoughts of most form experts and tipsters, it was generally considered that although his class edge had him as a strong contender, he would probably benefit from the run. However, class has a habit of prevailing and so it was in the aptly-named Dominant Handicap over 1100 metres for 3 year olds.

Addiction To Rock settled towards the rear after drawing wide and was taken to the rail by young apprentice Mitchell Speers. Travelling well within himself coming to the turn, The Rock was sweating on a run. Counterfall, a fancied opponent, was also sweating on the same run and when it appeared for Counterfall, Addiction To Rock copped a hammering between horses just as he was gathering momentum. But Addiction To Rock is a professional little racehorse and he dusted himself off, regained his head of steam and exploded to the post through a narrow gap to record his third Saturday city win this season.

Addiction To Rock has been a wonderful horse for connections. Today's win was his fourth from just 12 starts and he has earned over $150,000 in prizemoney, which is an exceptional achievement for an Adelaide-trained horse. It should be noted that SABOIS bonuses have contributed substantially to this return for connections, and these bonuses will also apply to The Rock's half-brother, a rising 2 year old by Haradasun, which is being syndicated by Clanbrooke and will be trained by Mark Minervini at Morphettville. Further details can be obtained from the websites of Mark Minervini and Clanbrooke.

Meanwhile, Addiction To Rock is set to tackle similar class races in the coming weeks and looks certain to be the one to beat again when he next steps out.