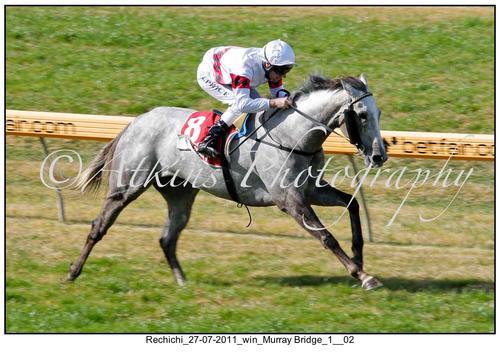 The Mark Minervini stable continued its rich vein of form with a spectacular double at Murray Bridge today which embeds Mark in the top 10 of the South Australian trainers’ premiership. A remarkable effort particularly when you consider the relatively low numbers in the Minervini yard.

In the first race on the card Minervini saddled up the well-bred staying mare Rechichi. The Elvstroem mare was the $2.50 favourite on track and didn’t let her followers down with a commanding 2.4 length victory with Power to Possess and Boolcunda Gold making up the minor placings. Post race Minervini was very pleased for the filly’s connections. “She’s been knocking on the door for a while now, so it’s good to get her maiden win done and dusted. Simon Price gave her a lovely ride and a lot of credit has to go to him also”.

In the last of the day the exciting 3YO filly Little House was out to maintain her perfect record in the 0-68 Fillies and Mares handicap over 1400m. Little House once again overcome a troubled run and showed great fighting spirit to defeat Cascade Now on the line to secure a Minervini / Price double. The Arena filly certainly looks a smart type and is likely to tackle bigger and better races in the near future.

For Minervini fans the fun doesn’t end there. Tomorrow, he saddles up another talented filly (Mimiele) who looks extremely well placed in the Spring Gully Handicap over 1400 metres. On Saturday, a host of winning chances including Hot Diamond and Addiction to Rock will fly the flag for the stable at Morphettville and Caulfield respectively. Exciting times ahead…Get on board.