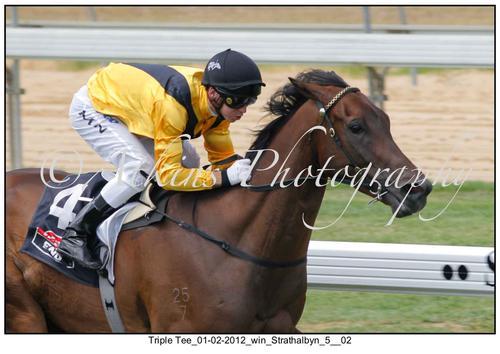 Punters sent the son of Tayasu Tsuyoshi (JPN) out a warm $2.10 favourite and barely a sweat would have been raised in anticipation of the result.

A half-brother to former Minervini stable star Vormista, and to the stable’s 2YO colt Truthfully (Redoute’s Choice), Triple Tee has returned to the winner’s stall a total of four times from eleven starts and it isn’t ambitious to say that there should be many more based on today’s performance.

Piloted by Adelaide’s leading jockey in Matthew Neilson, Triple Tee looked to have the race in his keeping a long way from home, cruising to the line a clear 1 ¾ length winner.

With the gelding only venturing past six furlongs on one previous occasion for a good fifth at Morphettville, we may see Mark test the horse over more ground in future, which will only add another string to the gelding’s bow.

Followers of the Minervini team can expect to see Triple Tee return to town at his next start, where he will no doubt put in another forward showing.