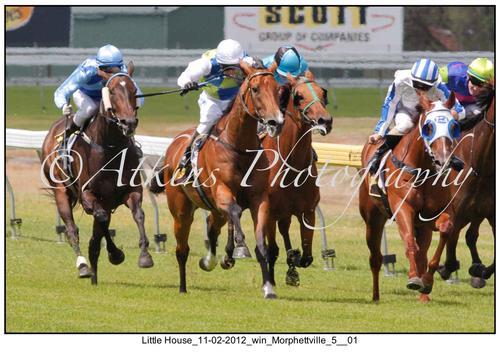 Big-striding, four-year-old mare Little House (Arena – Prairie) has scored a huge win, first-up from a break over 1250m to give Mark Minervini a double at Morphettville today.

The win kept the mare's 100% strike rate intact, scoring her third win from as many starts. It hasn't come without it's dramas though, with Little House requiring a "holiday" in Victoria to overcome an aversion to the enclosed spaces of the barrier stalls.

Having ventured into the heads of gallopers such as Maldivian, Tall Timbers and Bin Dancin', to name a few, renowned horse-breaker Shane Bottomley was given the task of soothing the mare's nerves and it would seem some of his magic has rubbed off.


Bottomley took Little House to the Moe trials three-weeks ago where she was given the green light and gained her "ticket" for her improved behaviour.

Back in the care of Mark Minervini and back to the races once again, Little House was sent out an easing $4.80 on track for her first-up assignment.
Chasing a Minervini double, Cahill settled the mare mid-field as they chopped and changed up front, running along at a good, even speed and coming to the turn, he angled Little House away from the fence and she quickly picked up ground to move to third on the corner.

There were a few nervous moments as the Peter Moody galloper Star Salute dashed clear coming to the furlong and had looked to have set up a winning break, but Little House, with Cahill at times riding on one reign, was able to straighten up, knuckle down and wear down the leader to put her head down right on the line for a determined win.


With the mare meeting every challenge presented, the Adelaide Carnival awaits and with the trainer's canny knack of placing horses to perfection, followers of the Minervini team can expect the mare to be contesting better races, with the aim of gaining a valueable black type win.