Group 2 Glory On The “Go” For Team Minervini 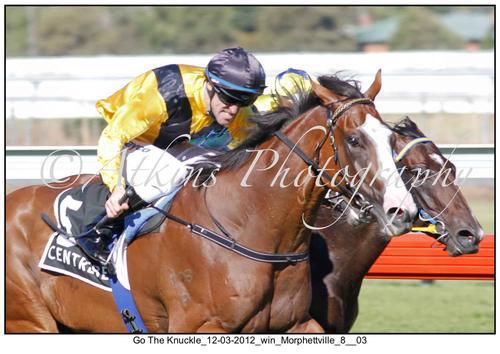 Go The Knuckle (3g Elvstroem ex Zefta) has scored a stunning win in the Group 2, $250,000 Euclase Classic at Morphettville today.

A $47,000 purchase from the 2010 Adelaide Magic Millions Sale, Go The Knuckle has now returned a tick under $230,000 in prize-money, in just  six starts for his ecstatic owners Rob Chapman, Matthew Pavlich, Nic Yeomans and Ben Corcoran.

A substantial rise in class, an outside gate, and a kilo-and-a-half weight swing in favour of his nemesis from the Redelva Stakes – Celebrity Girl, two weeks prior, were not enough to stop the gelding as he gave his well credentialled rivals a start and a beating.

From the time the gates opened, it was obvious that the race would be a jostle for the perfect position in running, and as Go The Knuckle had drawn wide in barrier nine, Shayne Cahill, fresh from his stirring Adelaide Cup win in the race prior, let the gelding find his feet, and settle towards the rear of the field.

Multiple stakes-winning filly Satin Shoes, who had run previously run a Group 1 placing behind the superstar Sepoy, made the all the running and went toe-to-toe with the Corstens trained Snitzem as the two ensured that the race was run at an even speed.

With Go The Knuckle finding some cover at the rear of the field, albeit three wide, it was always going to take a super performance for the gelding to make a wide run, and pass each runner on his way to victory.

Names like Zaromar, Hot Spin, Celebrity Girl and Satin Shoes – all city winning horses, had Go The Knuckle looking all the bit of his 25/1 starting price as they all began to stake their claim for the Group 2 prize.

Once Cahill gave Go The Knuckle his head, he quickly started to circle the field and coming to the turn, he simply kept on running, powering down the centre of the track for a remarkable win.

A huge Adelaide Cup Day crowd was on hand to see the win, and it was noted before the event that Minervini had turned Go The Knuckle out in fantastic order.

The win also capped off a huge week for part-owner and Adelaide Crows chairman Rob Chapman who saw his Crows power into the NAB Cup Grand Final after a massive win against last year's Grand Finalists, Collingwood.

It would now appear that Go The Knuckle has asserted himself as the current "stable star", and the way this fellow keeps stepping up to each challenge presented, we may just see the famous "Gold and Black V" at Melbourne's 2012 Spring Carnival.