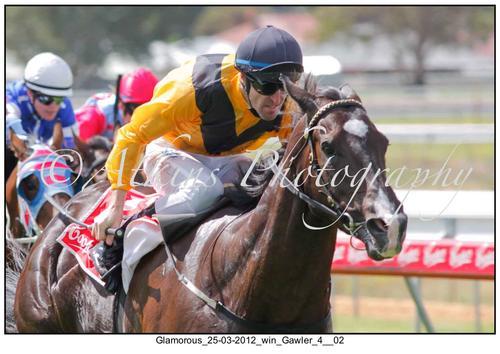 The Mark Minervini/Shayne Cahill combination have teamed up once again to produce another winner at Gawler today, with three-year-old filly Glamorous (3f Mugharreb ex Pitch) taking out the Maiden Plate over 1200m at her race track debut.

A half-sister to the dual city winner and very smart Victorian, Prospect, the filly went into the event having trialled publically just the once, back in October of 2011 where she was given an easy time behind the stakes-placed Tony McEvoy galloper in Assertive Eagle.

Smart punters, realising the red-hot form the Trackside Racing team have been in of late, kept the filly safe in betting and when the gates were released, she went around at a solid $5.50 on-course.

Cahill was able to balance the filly up in a nice spot, third, with a trail behind the leaders and the filly travelled sweetly for much of the trip. So sweet in fact that even the on-course race-caller commented on how all that was needed was some luck, and she would surely be in the finish.

That luck did come and the jock was able to angle Glamorous away from the fence, and she levelled up to the heavily backed Presidium who was also travelling particularly well.

As the two drew away from the rest of the field, a bumping dual ensued, with Presidium shifting out and making contact with the Minervini runner, forcing Glamorous off balance for a stride or two.
Not to be outdone, Glamorous balanced up once again and drew level with Presidium, poked her head in front with a furlong to go, before another bump from Presidium was enough for Glamorous to be put off balance again, with the filly going down by half a length on the line.

The interference was enough for Cahill to lodge an objection, claiming that the interference in the home straight was grounds for a reversal of the finishing positions, and with the Stewards being in agreeance, Glamorous was declared the outright winner.

A quick form wrap-up of the race is a good pointer for Glamorous as both the second-placed Presidium and the third-placed galloper Albatross look to have above average ability, having good maiden form before the event, and with the considerable margin to third place, this filly looks to have a bright future.