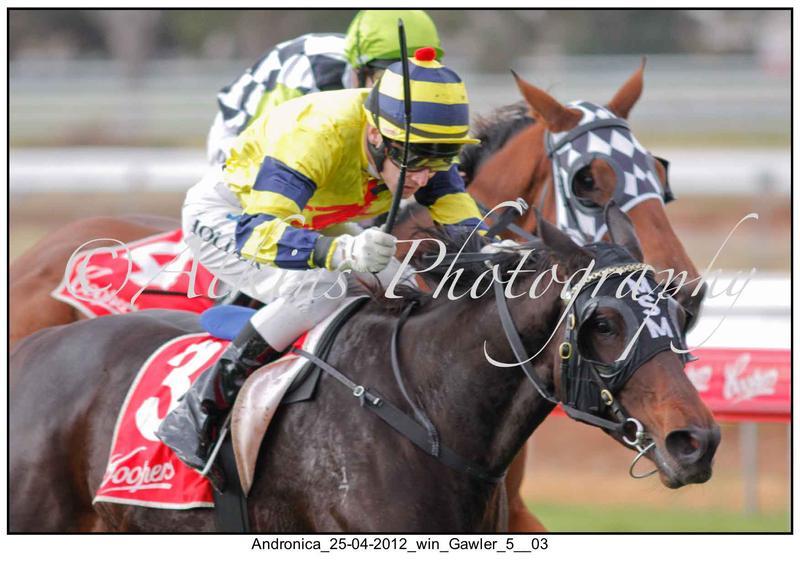 Another patient ride from Jason Holder has seen Andronica, score back-to-back wins in the Leading Edge Telecoms 0-71 Handicap over 2109m at Gawler today.

Sent out as a solid $2.80 favourite at the time the gates opened, the mare was always well back, and as they left the straight the first time, she only had one or two rivals behind her.

It was Clearly Passionate who made the running as they sorted themselves out, and once he had found a clear lead, Adrian Patterson put the brakes right on, and you could have “thrown a blanket” over the eleven horses.

The further the race went on, the more dire the situation appeared as the front-runner had done a good job to keep the pace to a crawl, and as they approached the home turn, the race-caller, with a noticeable change in pitch, noted that “Andronica was last and stone motherless!”.

Holder got to work though, and the mare started to respond, picking off rivals one at a time and as they turned, the mare looked to be closer to the outer fence than the inner, eight horses wide and putting in a huge run.

With a furlong to go, it was the “form horse” of the race in Rikbat who appeared to have the race shot to bits, but still unleashing her powerful run out wide was Andronica, and she raced to Rikbat and drew away for a length and a quarter win.

The race-caller bellowed “Big, big win”, and right he was – a last-to-first, unlikely victory for the mare.

As mentioned in this website’s blog previously, Andronica is improving with each staying run, and after notching back-to-back provincial wins, a return to metropolitan assignments in the near future looks likely.

Group 1 racing this Saturday at Morphettville where a sell-out crowd of 30,000 will be in attendance to witness Black Caviar attempt a record-breaking 20 wins in succession.

The Trackside Racing team will be chasing stakes glory of their own with Little House (Shayne Cahill) in the Group 2 Queen Of The South Stakes and Go The Knuckle (Jason Holder)in the Group 3 DC McKay Stakes.