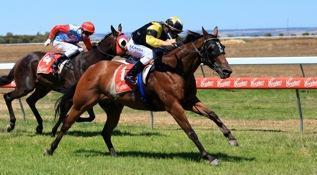 Addiction To Rock (5g Rock of Gibraltar – Bellediction) has returned to the winners’ stall in comprehensive fashion, taking out the Open Handicap at Kangaroo Island today.

A winner of almost a quarter of a million dollars in stakes, the gelding went into the event searching for a track with some give, and although it didn’t present itself on this occasion, the drop in class meant that he was simply too good for his five rivals.

Whilst it did appear that his recent form wasn’t to his usual standard, the form around the gelding has actually been nothing short of super, with Barigan Boy continuing on his winning way the day prior at Morphettville, and multiple stakes winner Budriguez, crossing the border to Victoria and winning the Group 3 Carlyon Cup.

With top weight of 61 kilograms, and the outside gate of six, Addiction To Rock jumped the gates cleanly, and settled towards the rear of the field over the six-furlongs. For much of the event, it was simply a case of sit and wait for stable-jockey Cahill, as the gelding’s obvious class advantage saw him travel up behind the leaders under a tight grip.
Rounding the turn for home, and despite having to travel four-wide around the tricky Kingscote track, Addiction To Rock steamed to the front with a minimum of fuss, and the only question was the final margin. With Cahill knowing he had his rivals covered a long way from home, the rider was kind to his mount, only getting serious for a few strides, and the gelding cruised to the line, victorious by just over a length.

A $40,000 purchase, that has returned the initial outlay almost five times over, who wouldn’t want a stable full ‘em?

Relatively lightly raced, there’s no doubting that this guy still has some unfinished business in the metropolitan area, and after today’s return to form, one can expect that in the near future.

With the move to the lovely property at Strathalbyn barely 8 weeks old, things are now starting to come together, and with happy horses enjoying nature’s surroundings, the only way is upward for the Trackside Racing team.