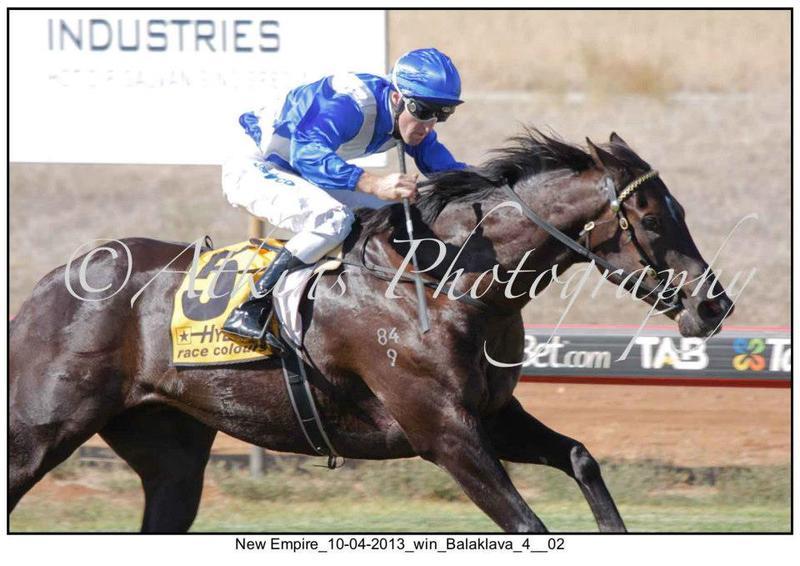 Whilst the team at Trackside Racing’s Agnas Bank property are slowly building their new empire, the equine version – New Empire, scored a most impressive win in the RSL Supports Defence Families Maiden Plate at Balaklava today, over 1400m.

By the Champion Sire that hardly needs introduction – More Than Ready (USA), from the Best Western mare, Western Invasion, New Empire was a $75,000 purchase by Kevin Dagg Bloodstock at the 2011 Adelaide Magic Millions Sale.

Whilst it was always apparent that New Empire was going to take time to mature enough for his racetrack debut, the wait was well worth it, with the three-year-old gelding performing creditably at his debut run a fortnight ago.
On that occasion he ran a close second to the Richard Jolly horse Captain Sharp, who had the benefit of race experience, having made his debut in late 2012.
Whilst Captain Sharp did finish a well beaten fifth and last on debut, the winner of that event was the un-tapped Essay Raider, so the direct and indirect form around New Empire is solid.

Taking all these things into account, the Trackside Racing team were quietly confident that the gelding would be in the finish at Balaklava today, and he did the rest.

The market and punters only wanted two runners – New Empire, and the Kavanagh trained filly September Star, who incidentally, also had some solid form in the metropolitan area, which lead to the filly being well supported in the market to start odds-on when they jumped.

From the time the gates opened, Shayne Cahill was able to find New Empire a lovely spot fifth on the fence with runners stringing out, via solid tempo, and ensuring that everyone had their chance.

Coming to the home turn, and with his feet on the dash-board, all that was needed was a clear run for stable jockey Cahill, and whilst it took a good 50 yards before he deemed it safe enough to push through, the run came and New Empire was away!

The gelding put three lengths on the field in the bat of an eyelid, and the race was over. Favourite September Star who had to circumnavigate the entire field, fought on valiantly to run second, cutting the final margin to 1.3 lengths at the finish.
All the honours were with the More Than Ready gelding though, and one suspects with the first two placegetters having the field well-covered, that the form out of the race will hold up, and both will be winning races in the near future.

New Empire is the seventh foal to race from Western Invasion, with five of those now being winners. At 18 years of age Western Invasion defies the breeding rules of some, that suggest the better progeny are born in the mare’s first few seasons at stud.

Just like New Empire, who was purchased at the Adelaide Magic Millions Sale, there are many a bargain to be had from the most recent Adelaide sale, with Mark returning with two strong colts and five lovely fillies – all from winning families.