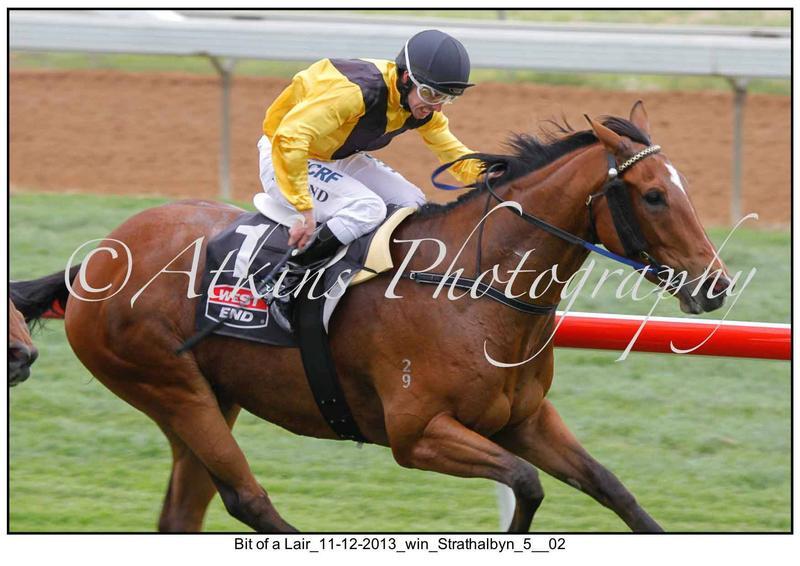 A little time, and patience have been a requirement, but four-year-old gelding Bit of a Lair (Tiger Hill (IRE) – Pick O’ the Bunch) won his maiden in determined style on his home track today.

A horse who puts himself into the race, and makes his own luck, Bit of a Lair was stepping up to the mile (1600m) for the first time, and a nice ride from stable jockey Jeffrey Maund saw the gelding hang on, after surviving a determined challenge from second-favourite Valik.

Sporting winkers for the first time, the gelding jumped straight to the front – as he has done at his past few starts, travelling well for the entire event, and when Maund asked for an effort, Bit of a Lair responded to put a length on the chasers, and ground out a solid win.

The extra distances are presenting no issue for the gelding, and one would expect him to keep on stepping up to the plate with each rise. Not known for his deeds in the Southern Hemisphere, Danehill stallion Tiger Hill (IRE) is better known for being the sire of some top-liners over a mile-and-a-quarter and beyond in Europe, and with Bit of a Lair being out of a Fantastic Light mare, these rises should present no issue.

Today’s win meant that in five starts, Bit of a Lair hasn’t been out of the money, and quickly takes his earnings to close to $20,000.

The win is also the second within weeks for Trackside Racing, and after a good rest over the winter period, the horses are looking fantastic, and are all looking to have benefitted from the break.

Congratulations to the owners of Bit of a Lair, Jason & Martina Hammerstein, and Mark & Michelle Minervini.