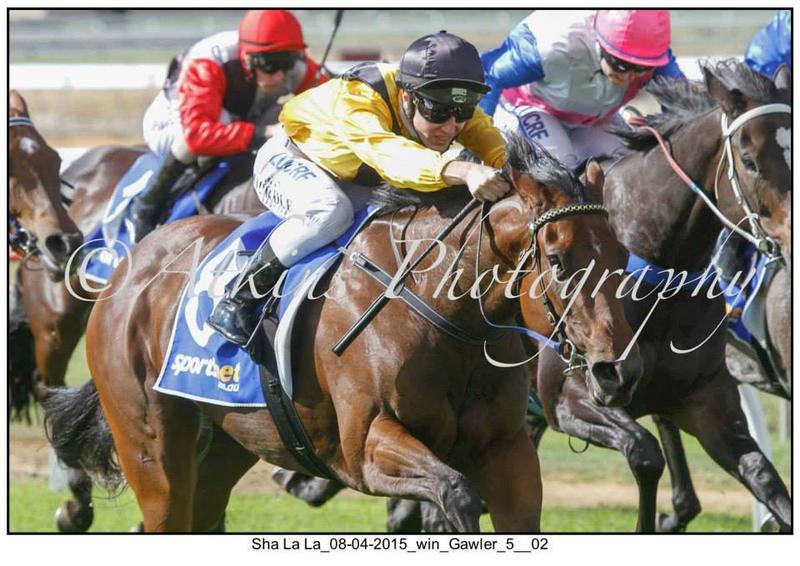 A change of silks, and a welcome change of luck for three-year-old filly Sha La La (Myboycharlie – Lechery), has seen the Mark Minervini-trained galloper easily account for her rivals in the 0-68 Fillies and Mares Handicap at Gawler today.

Aided by a glorious ride from apprentice Ryan Hurdle, the filly was a touch tardy out of the gates, which enabled horse and rider to balance up three pairs back on the fence.

As the business end of the event approached, Hurdle used the corner to push away from the fence and bullock his way into the clear – something the race-caller noted, and Sha La La, as she has done at each start in her short career, put her head down, and gave her all.

The win was an easy one, and the jockey gave the filly an easy time of things over the final 100m, and she coasted to the line a winner by just over a length.

Today’s win was the second (both at Gawler) from six starts for the excited group of owners, and the ease in which Sha La La was able to win today should see many more.

Sha La La is the first foal of the Tale of the Cat mare Lechery, and was a $22,000 purchase at the 2013 Adelaide Magic Millions Sale.

The Minervini stable will be hoping that they can saddle up their third winner in a row this Saturday, with the Bel Esprit gelding Mr Porter looking to keep his winning record intact in the 0-72 Handicap.