Winners – at the double 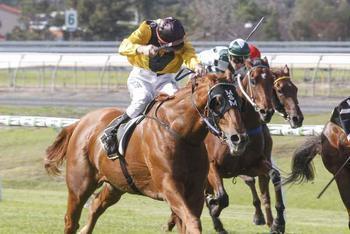 Kicking off the day in fine style was the well-bred maiden galloper Zolotoi (3g Starcraft – Ain’t Seen Nothin’) who produced a wonderful final last 400m, to come from well back in the field and mow down his rivals.

Given all the time and patience required that’s seen him furnish in a wonderful specimen of an animal, Zolotoi kicked off his career in late November of last year, doing much the same as he did in today’s win – settling well back and hitting the line full of running.

Sent out for a spell exactly one month after his debut, the gelding resumed a month ago and whilst he couldn’t get warm in the early part of the 1200m journey, his final 100m showed that he would welcome any rise in distance that was to come his way.

Drawing barrier 18 (14 after scratchings) for today’s event, there was never any doubt that Zolotoi was going to be given all the time required to find his feet by stable rider Shayne Cahill and the gelding slipped back through the field and settled last, with the whole field in front of him.

Zolotoi was a $100,000 purchase by Mark from the 2014 Inglis Easter Yearling Sale. His pedigree page is littered with Stakes winners, and he is the seventh foal (all winners) of the Barbara Joseph-trained, stakes-winning mare Ain’t Seen Nothin’.

An incredibly versatile racehorse, the Nothin’ Leica Dane mare won stakes races at 1400m and was 2.2 lengths from Mummify when running fifth in the 2003 Caulfield Cup. Her time as a broodmare has been just as impressive, with Zolotoi’s siblings including Ain’tnofallenstar, Singapore Champion Stepitup, and the Gerald Ryan stakes-winner Bachman.

Just over 45 minutes later, and it was the improving mare Freedom Road (4m Good Journey – Voltara) that justified her short quote by winning the 1550m BM64 event in fine style.

Quickly out to 1500m last start at Gawler and Freedom Road again showed that a win wasn’t far away, coming from well back to the turn to hit the line full of running.
Staying at the same distance range for today’s event turned out to be a winning move, and whilst the manner in which Freedom Road completed the task was a little different to her previous runs, the end result is what was desired.