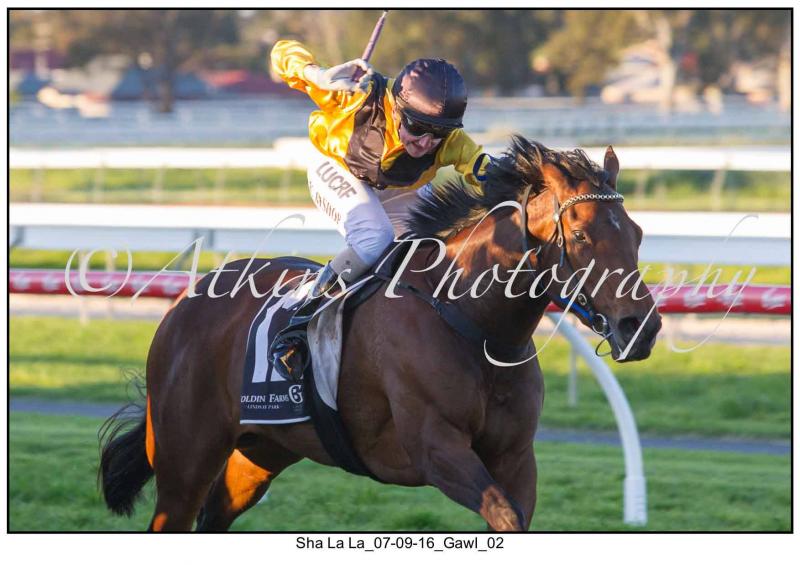 Five-year-old mare Sha La La (Myboycharlie – Lechery) has returned to the winner’s stall at Gawler under a ground-saving ride from Krystal Bishop.

Once again, Sha La La showed she had a liking for Gawler, with the win not only being her third at the venue, but her third overall.

Leading into today’s victory, a closer look at the mare’s form really didn’t do any of her recent efforts justice. At each of her five runs this preparation, she has settled back in the run and made good ground at the end of each. The last time apprentice Bishop sat atop Sha La La was in late July at Morphettville, and with riders not knowing whether they wanted to use the inner or outer part of the Morphettville track, she stuck to the centre and kept battling on, holding her ground well all the way to the line.

Two runs following at both Gawler and Murray Bridge were much of the same, with Sha La La settling back in the run, and closing well late.

Sent around at an SP of $12 for today’s event this was only the second time in her 15 starts that the mare had ventured beyond 1500m.

Drawing wide, Bishop again let Sha La La find her feet back in the ruck, and travelling past the 600m she spotted the leaders close to 10 lengths. With riders fanning wide nearing the turn, what was to be the race-winning move eventuated, with the rider sticking to the inside and saving a lot of ground. As the field straightened, Sha La La had gone from spotting the leaders many lengths to being right in contention, and despite having to fend off two challengers, she stuck her head out near the line and recorded a good win.

With Sha La La showing as she gets older that she is adept to slightly longer than the normal sprinting trips, expect to see her tried around this distance range in future.