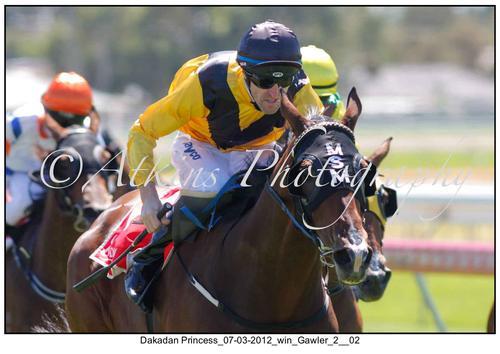 Having her fourth start,  the filly hinted that the 1511m would be more to her liking with two very good runs at her previous two starts over 1200m and 1400m respectively, where she was as far back as 12th at the 400m mark in the latter, making good ground at the end of both races.

With the blinkers on, stable-rider Shayne Cahill settled Dakadan Princess towards the rear of the ten-horse field, and with horses kicking up on her inside, the filly was left without cover for much of the trip, making the win even more meritorious.

It mattered little though as approaching the turn, she made her move and began to work into the race, picking up each opponent one-by-one until she raced clear at the furlong for a soft two-length victory.

Wily punters and followers of the Minervini team would have noted that as little as $2.80 was bet about Dakadan Princess fifteen minutes prior to the jump, before the heavy support for the Gordon Richards trained favourite Reachfar pushed her starting price out to as much as $7.00 on some totes.

With the Australasian and South Australian Oaks looking particularly “light” on exposed form, and providing Dakadan Princess continues to improve, it may not be too ambitious to suggest that this Princess, may just put her hand up for a crack at these classic events.