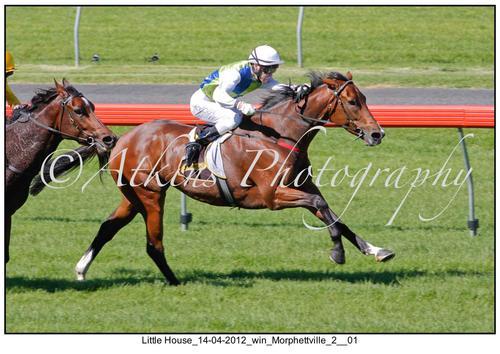 Another day, another winner for the Trackside Racing team as Little House (4m Arena - Prairie) raced clear with the Projection Graphics 68+ Handicap over 1600m at Morphettville today.

The mare is becoming quite the regular on the Trackside Racing website, as today was her fifth win from only six starts, and there appear to be many more in store.

The only blemish (if you can call it that), came in the Listed Matrice Stakes last start, where the mare settled well back in the talented field, to run home the equal-fastest final 600m (34.49 sec) to be beaten just under a length-and-a-half - the winner and stakes-performer Bagman being the other to do so.

That run alone was a good pointer that Little House would be hard to beat today, and she didn't let any of her backers down.

Jumping from gate six in the seven horse field, Jason "Stubby" Holder, (who is also becoming quite the Trackside Racing website regular), was able to let the mare clear the gates at her own leisure, and find a nice spot, two off the fence, with three opponents behind her.

One of those was the equal favourite and highly talented Bowerbird, who trailed Little House for the entire journey, and as the race panned out, it became clear that both jocks, had each other in their sights.

With Little House and Bowerbird circling the field quickly approaching the corner, it was the stakes-winner River's Lane who gave a good kick and for a moment it appeared he would prove hard to run down.

That moment was fleeting though as the two quickly gathered the leaders in, and raced clear down the straight to fight the race out.

For each stride that it appeared Bowerbird would challenge Little House, the gritty mare dug in and fought off her challenges to eventually win by three-quarters of a length (fastest last 200m in 11.75 sec), with the an ever-widening five lengths to third place.

A good form judge will always tell you it's "who" you beat, and the form around Little House is impressive. Today was also the first time the mare stepped out to the mile distance, and the way she was able to settle, and finish the race off with a slashing final furlong, is a good pointer that she may be able to get over more ground in future.

With the Minervini stable up and firing, my "tip" would be to check out some of Mark's yearling purchases under the "Horses Available" banner above and get involved with the team!