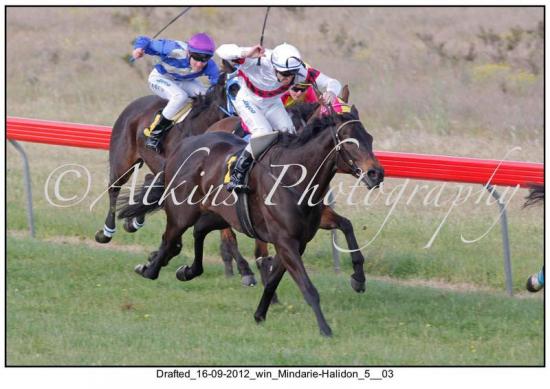 Off the back of some decent metropolitan form, the gelding was sent out an even money favourite, with punters only seeing one danger in Tasteofenergy.

From the time the gates opened, stable-rider Shayne Cahill was able to settle Drafted in behind the leading duo, and he enjoyed a lovely run for much of the trip.

As expected Musty Springs lead the field as they raced along the back, and coming to the 600m, the second-favourite Tasteofenergy started to pour on the pressure, and the race was on.

Enjoying a cushy run for much of the trip, Drafted was taken off the fence by Cahill, and just as punters thought he would stake his claim and put the race beyond any sort of doubt, he was under tremendous pressure, and being ridden-along just to stay in touch.

Rounding the turn and Tasteofenergy shot away and the race looked well and truly over, with Drafted a further two lengths away having to contend with the outsider Miss Ball trying to push out from underneath him. Cahill didn’t give up though, and whilst throwing absolutely everything at Drafted, bar the kitchen sink (as they say in the classics), the gelding raised one final, and gallant effort to nail Tasteofenergy on the line.

The cry that was heard when they crossed the line was one of disbelief and relief and once the photo finish was put up, Drafted was confirmed as the out-right winner.

The Trackside Racing team’s patience is being rewarded as Drafted matures, and gets out to longer trips, and you can expect to see the gelding competitive in whatever he competes in, in the near future.