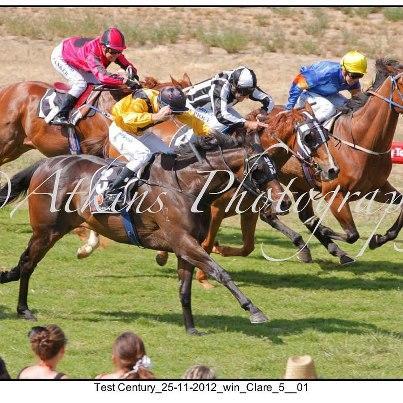 Stable-favourite Test Century (8g Testa Rossa – Jolimont) has been rewarded for his consistency with a tough win in the Jim Barry Wines 0-72 Handicap over 1200m at Clare today.

Having joined the Trackside Racing team in January 2011 from the John Moloney stable in Melbourne, the gelding has been a model of consistency with no less than 20 cheque “earns” in his 26 starts for Minervini.

Only a length or two from the winner in town at his last two assignments, Test Century had to contend with the steadier of 59 kilos for today’s assignment, yet he was able to handle that, and the tricky track with ease.

The outside barrier of the ten runners was always going to pose a problem around the Clare circuit and from the times the gates opened, stable jockey Shayne Cahill eased Test Century back to the rear of the field.

As the pace slackened, Cahill did what good jockeys do, and elected to send the gelding forward, circumnavigating the field with a minimum of fuss – so much so, that as the runners turned for home Test Century had hit the front!

At times maligned by punters, and race-callers alike, the announcer urged whoever was listening to not allow the old boy to see the winning post, yet Test Century rewarded favourite backers on this occasion, by racing on to a determined win.

If today’s victory is anything to go by, age certainly has not wearied the hardy gelding, and he will race on for many seasons to come.

Test Century is the seventh foal to race from the Century mare Jolimont, and it appears all of her progeny get better as they mature. Jolimont has had 11 foals to race with seven of those being winners, including the stakes-winner Racer’s Run, and stakes-placed sprinter Jolipal.

The Trackside Racing team currently has a lovely, strong three-year-old half-sister to Test Century, by the Caulfield Guineas winner God’s Own available for syndication.