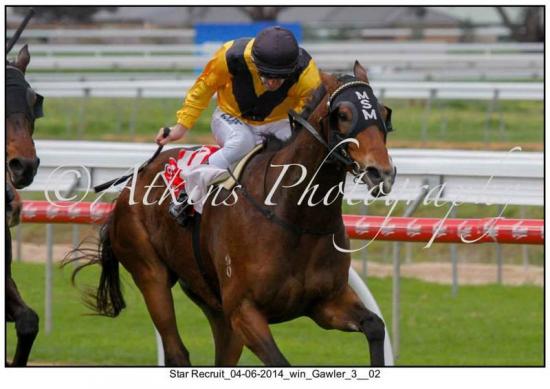 Three-year-old gelding Star Recruit (Not a Single Doubt – Halo Amore) has broken his ‘duck’ at Gawler today in determined fashion, taking out the Gawler South Bakery Maiden Plate over 1700m.

Today’s run was the Mark Minervini-trained galloper’s third this preparation, with the sharp rise to 1700m (from 1200m), and the addition of blinkers proving to be the telling factor in the horse’s maiden win.

Whilst Star Recruit’s first two runs this time in appeared to be “just ok” at first glance, it can be noted that on both occasions he ran on well, and passed runners in the run to the line.

The temptation would no doubt have been there for Minervini to move up a furlong in distance until the horse found a suitable distance range, but to his credit, he had the horse fit enough to push straight to the 1700m trip, and the addition of blinkers had the gelding’s mind right on the job.

Punters were expecting this to be a race in two, with Jaspers Glen, having already placed in town, showing that he possesses a great deal of ability, and the race went to script as they fought out a tough finish.

Jockey Shayne Cahill gave Star Recruit every chance – slotting in one-out, and three back until he was ready to make his move, and approaching the corner the gelding picked off rivals, hitting the lead on the home turn. Enter Jaspers Glen, who threw out a determined challenge, poking his nose in front of Star Recruit with about 300m remaining. Not to be denied Star Recruit dug the heels in and fought back strongly to record a tough win, with the margin to third suggesting not only Jaspers Glen shouldn’t remain a maiden for too much longer, but that Star Recruit will no doubt progress to bigger, and better things.

The win of the Not a Single Doubt gelding is the first for Minervini from his new Morphettville base.