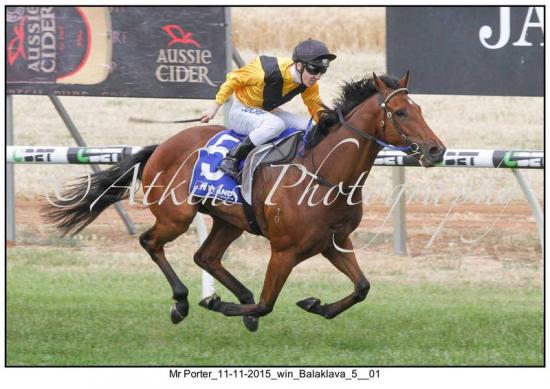 In what has been puzzling month for the Bel Esprit gelding's form-card, where he has been good, and then not so good, yesterday was a pleasing form reversal on his effort at Gawler less than a week ago.
Well-supported yesterday and returning to a drier track, apprentice Ryan Hurdle was positive from the time the gates opened and he sent the gelding forward, eventually finding the lead at the 1100m.
Travelling well to the turn, Mr Porter was asked for an effort as they swung for home and he gave a decent kick, putting a length on his rivals.
In what would have been a pleasing sight for trainer Minervini, Mr Porter was challenged, and almost headed at the 300m, but he kept fighting to grind out a tough front-running win.

Today's win was Mr Porter's second in his eight start career, and he takes his earnings past $22,000.

Another pleasing aspect of Mr Porter's victory is the fact that Minervini also trained the gelding's dam Dolce Gabana for the Alvaro family, and they again share success with her Bel Esprit son.