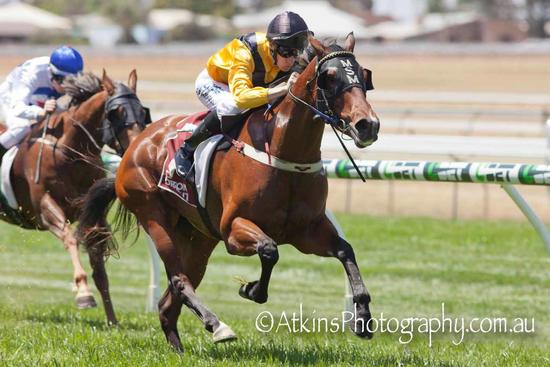 Having only acquired the then filly in June of this year, Military Forces began her career at Minervini Racing as a maiden, but that box was quickly ticked with a dominant win over the 900m on Murray Bridge Cup day, two months after Mark had sent her for a break.

Enough was thought of the win to send the mare to town at Morphettville on Melbourne Cup day, and whilst on paper it reads that she ran fifth, she ended up less than two lengths from the winner after travelling wide throughout.

Stepping up in grade, fingers were crossed all week, as Military Forces was fourth emergency and needed scratchings just to gain a run in the race. When that run came on Saturday morning it was all systems go and the mare went into the race as a well-supported each-way chance.

From the time the gates opened, no better script could have been written, with the race panning out to perfection. With a strong speed on up front, stable regular Todd Pannell let Military Forces find her feet back in the field and she travelled very strongly toward the turn, picking up ground out wide, under little urging from Todd.

As the field turned, Military Forces joined in strongly out in the middle of the track, and she charged home all over the top of her rivals and scored a soft win.

Military Forces' win was Minervini Racing's sixth from their last 17 runners - an incredibly hot 35% win strike-rate since late September. The win was Military Forces' second from 12 starts, and she takes her stake earnings to a tick over $40,000.