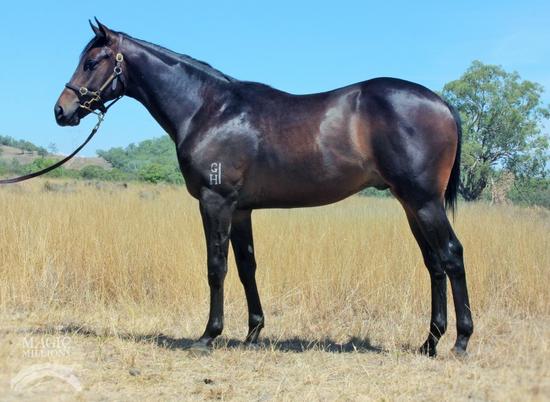 By the 2015 Caulfield Guineas winner in Press Statement, this stunning two-year-old gelding hails from a family that is packed with stakes performers, including Singapore's Champion juvenile of 2016, in Lim's Racer.

Since we purchased this gelding from the Ambergate Stud at the Adelaide Magic Millions earlier this year, he has had a very important pedigree update. His three-year-old half-sister - CHAILLOT, who is trained in Victoria, won on debut at Ballarat in early April, before she made it two starts, for two wins when winning the Listed Anzac Day Stakes at Flemington.

Pedigree updates of this nature are a rare occurrence, and we were fortunate enough to make our purchase at the right time.

Reports from the breaker who is putting him through his early education have been nothing but glowing, describing him as intelligent, a lovely mover and great to do anything with. Definitely one of the top of this year's class.

It is also worth noting that this galloper is nominated for NSW's rich BOBS and BOBS Extra bonus scheme, which becomes even more important, as we have recently located to Newcastle in NSW.

For any further information, or to book your spot in this magnificent animal, please contact Mark on +61 417 811 641 or email mark@minerviniracing.com.au