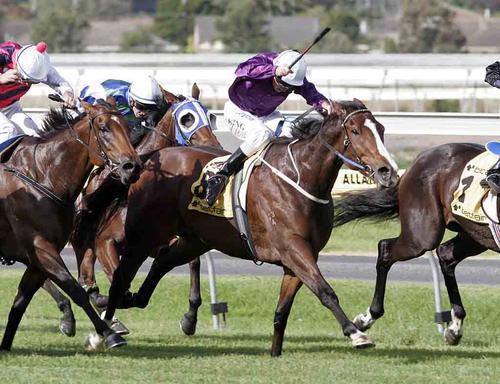 Mark Minervini-trained mare Hanabananah caused a boilover in winning the Listed Betfair.com Proud Miss Stakes at Allan Scott Park Morphettville yesterday.
Starting at $41 and rated perfectly in front by leading Melbourne jockey Steven King, Hanabananah defiantly fought off several challengers all the way down the straight to win by a nose from Impressive Eagle.  The first five across the line were separated by a mere half-length.
The win continued the exceptional run enjoyed by Hanabananah’s owners since they made the decision to transfer the horse from Victoria into the capable hands of Mark Minervini at the end of last year.  In 6 runs since joining Minervini’s Morphettville stable, Hanabananah has won 3 times, never finishing further back than fourth, and earned over $100,000 in prizemoney.  In addition to the prizemoney, yesterday’s Listed race victory will add considerable value to Hanabananah as a broodmare prospect.
The win also affirmed Mark Minervini’s growing reputation as a successful trainer of tried horses, which in fact prompted Hanabananah’s owners to send her to Minervini.  Tudor Spirit, Changing Eyes and Hanabananah have all won city races this season for Minervini after their careers had more or less stagnated for other trainers.  The successes of Chief Of Staff this season highlight that Minervini is pretty handy with young horses too.
Hanabananah’s win was Minervini’s first stakes victory since his return from retirement early last year and now firmly entrenches him in Adelaide’s Top 10 in the Trainers’ Premiership.  Of those in the Top 10, only Mark Kavanagh and Richard Jolly (first and second in the Premiership respectively) have a better winning strike rate than Mark Minervini – evidence that Minervini places his horses where they can win, even if punters mistakenly thought he was being a little ambitious with Hanabananah.