“Goodbye…See You Pulling Up!” Rock Brings Up The Hat-Trick 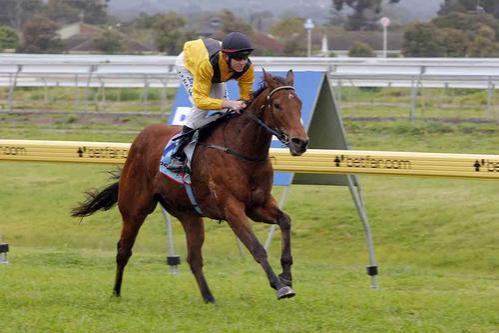 These were the words of Adelaide racecaller Terry McAuliffe to describe the acceleration shown by smart 3 year old Addiction To Rock, when he put paid to his rivals in yesterday's 1400 metre Madson Rowley Handicap for 3 year olds.

Addiction To Rock was lining up for the second consecutive Saturday at Morphettville Parks, with connections hoping he could emulate his impressive victory 7 days earlier. As it turned out, he did that…and more.

Addiction To Rock ($1.70 fav) jumped perfectly and went straight to the front, but not without challenge as Victorian galloper and second favourite, Godfuhrsaken, sat at his girth. Godfuhrsaken waved the white flag as the field turned for home which enabled Delzera, which had been backed from $8 to $5 on course and enjoyed a perfect run behind Addiction To Rock, to pop off the favourite's heels and challenge for victory.

However, Delzera never even managed to reach Addiction To Rock's hind quarters. A dig in the ribs from young apprentice Jordan Frew was all Addiction To Rock needed to have the race sown up in barely more than a stride. The winning margin was 5 3/4 lengths easing down.

The win was Addiction To Rock's third in succession, and he continues to make great strides this preparation. The improvement he has shown in each of his 5 lifetime starts is a credit to his trainer Mark Minervini, who has placed Addiction To Rock a treat and has him fit, firing and addicted to winning.