Mimiele makes a mess of them 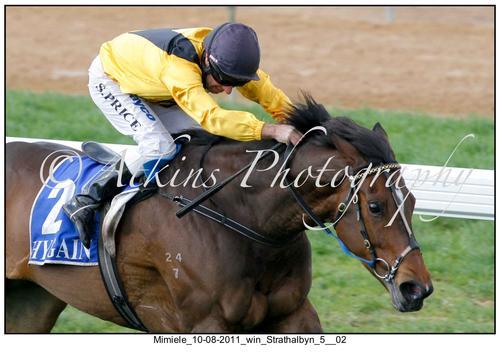 These were the words of Adelaide race caller Terry McAuliffe to describe the acceleration shown by smart 4-year-old Mimiele, when she put paid to her rivals in today's 1350 metre Rah Research SABOIS Fillies and Mares Class 2 Handicap.

Mimiele ($3.10 fav) jumped well from an awkward gate and needed to do a little bit of work early behind Kuitpo Blaze. As they turned for home, a dig in the ribs from leading Adelaide hoop Simon Price was all Mimiele needed to have the race sown up in barely more than a stride. The winning margin was 7 lengths easing down.

The win was Mimiele’s second career victory and she continues to make great strides this preparation. The improvement she has shown in each of her starts this preparation is a credit to her trainer Mark Minervini, who has placed Mimiele a treat and has her fit and firing.

Mimiele was selected and purchased by popular media identity Richard Zachariah at the 2009 Adelaide Magic Millions sale, he races Mimiele with Sarah Hyde, Nick and Kath House. The fillies' win was Mark Minervini's 2nd win for the season from only 4 runners.