Whick, Whack, “The Knuckle” Is Back 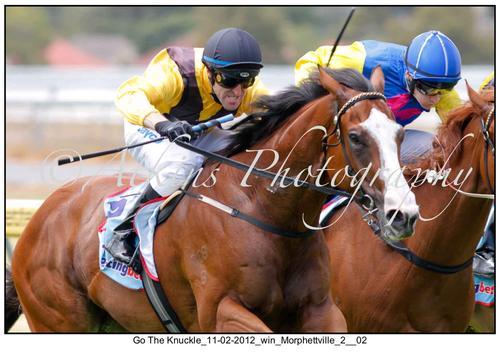 Mark Minervini trained three-year-old gelding Go The Knuckle (Elvstroem ex Zefta) has returned from a break in slashing style, winning the 3YO Handicap on the Morphettville Parks track today.

A $47,000 purchase from the 2010 Adelaide Magic Millions Sale, Go The Knuckle has now returned a winner (and returned his purchase price) in two of his four starts, and if today's perforance is anything to go by, there should be many more.
From the outset, the speedy Counter Sign assumed his favoured front-running role and punters would have been comfortable with the way things were panning out as the $1.70 favourite was cruising along at his own leisure.
Shayne Cahill let Go The Knuckle balance up and settle fourth, four lengths away, and as the field thundered to the corner, he clicked the big boy up and he started to respond and move into the race.

As the pony-sized Counter Sign starting to feel the pinch, Go The Knuckle loomed large and a battle royale with the Jolly-trained Shoctonic ensued, with Go The Knuckle going home the better, and pulling away on the line.
A slick time of 58.05 – just three-quarters of a second slower than the open class winner Happy Angel in the next race, affirmed that Go The Knuckle is a horse with a bright future.

Minervini publicly stated before the event that the 1000m trip might be a touch short for Go The Knuckle, and the way the gelding steamed home, followers of the team can expect "The Knuckle" to step up in trip and grade at his very next start.
With Minervini being an avid Crows fan himself, and the gelding being part-owned by Crows chairman Rob Chapman, i'm sure they will be hoping that one of the other part-owners, Fremantle captain Matthew Pavlich doesn't decide to "go the knuckle" when the two sides meet in Round 10 of the 2012 AFL season.