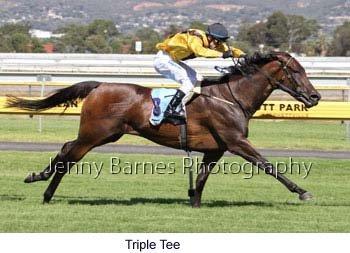 The Mark Minervini trained four-year-old gelding Triple Tee (Tayasu Tsuyoshi ex Truly) has shown his rivals a clean set of heels (or plates) in winning the 0-86 over 1600m at Morphettville today by a very comfortable 3.8 lengths.


Followers of this website's blog would have noted that following Triple Tee's win at Strathalbyn in early February, it was mentioned that the gelding had only ventured beyond seven furlongs once, for a very good fifth at Morphettville, and that we may see Mark test the gelding over more distance in the future.


With stable-rider Shayne Cahill aboard, Triple Tee travelled beautifully in the lead for most of the journey, and once given his head, dashed clear from his well credentialled rivals for a most impressive win.


With Triple Tee meeting every challenge thrown at him so far, it's up to Minervini to raise the bar further and the up-coming Adelaide Carnival and it's riches, look to be an obvious option.


Accumulating five wins from his thirteen starts and a tick under $70,000 in stakes, followers of the Minervini team can expect Triple Tee to put in another dashing display at his next start