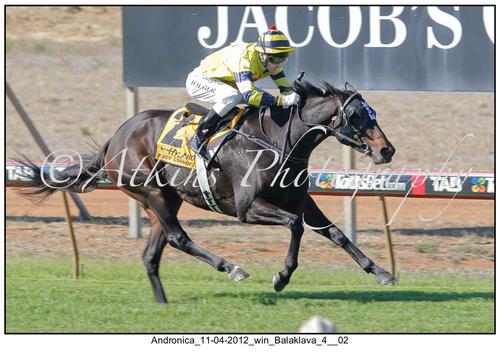 A lovely ride by Jason Holder on the Mark Minervini-trained Andronica (4m Mujahid (USA) ex Mycedes) has seen the mare take out the Morphett Vale RSL 0-68 Handicap over 2200m at Balaklava today.

Dropping back from Saturday metropolitan class, Andronica went into today’s event a very warm even-money favourite and she had the race in her keeping a long way from home.

Jumping from barrier five in the eight-horse field, Holder was able to find a spot one off the fence as the field moved out of the straight for the first time.

Travelling particularly well for much of the trip, the one they heavily backed to beat the mare – the Ken Sweeney trained Goldstinger, always had Andronica in his sights, trailing her, and approaching the 900m and with Goldstinger wanting to get the job over and done with, Neilson eased off her heels and the race was on!

Taking a peek over his right shoulder, Holder was awake to the move and he pushed Andronica three-deep, thus forcing Goldstinger four wide, as the two favoured runners poured the pressure on the two leaders.

Turning for home and the line of four quickly became a line of two, as Five Iron and Lord De Veer put up the white flag, leaving Andronica and Goldstinger to fight the race out.

That was just about where the competition ended though as Andronica, travelling much the better, raced to the lead, extending her margin with each stride, before Holder eased her down towards the line for a comfortable 2.2 length win.

Having shown to be a smart type from day one, with two early victories and a trip across to Melbourne for a stakes race over the Melbourne Spring Carnival, it seemed Andronica suffered a touch of the “second prep blues”, as fillies and mares can often do, so it’s fantastic to see that Mark’s patience has paid off with the mare looking to have a bright future over the staying trips.

For more updates on where Andronica will head to next, sign up as a “fan” on the Trackside Racing website.