The Mrs Gets Home 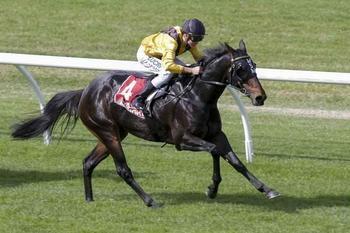 A welcome return to the winner’s circle for the Trackside Racing team, as Mrs. Mariella (4m Clangalang – Dolce Gabana) strode away to her maiden victory at Murray Bridge yesterday.

A recent acquisition, the mare went into the 1400m event off some solid form, and it was expected that the extra trip would be to her liking.

Apprentice Zac Spain, at his twenty-second race ride did everything that he was tasked with correctly, and gave Mrs Mariella a lovely ride. As soon as the gates opened, Mrs Mariella was on the ball, bouncing out of the gates, and matched strides with the horse on her inside for the first half of the event.  Travelling so well within herself, Spain let the mare stride and she drew a length clear down the side, virtually asking the others to put up a challenge. Cornering, and the well-backed Silver Illusion, who had been stalking the two front-runners, tracked up with some purpose, but as quickly as a challenge looked likely, Mrs Mariella had again strode away, and was off and gone, leaving her rivals to battle out the minor-placings.

For Spain – this being his first winner, it was much a case of keeping the mare steady, and on-course to the finish – a flick or two were all that were needed to keep her mind on the job, as he guided her down to the line two-lengths clear.

With maidens being ticked off for horse, and rider, it appears there are plenty more in store for both, and let us hope we see young Zac in the Gold, Black V, and Cap in the near future.

The win of Mrs Mariella was somewhat of a family affair for the Minervini stable, with Mark having trained the city-winning dam, in Dolce Gabana. Minervini also trains the unraced three-year-old half brother by Bel Esprit, named Mr. Porter, so it’s great to see for all involved that the Jeune mare will be a part of the family for a few years to come.

Congratulations to the owners Paul Alvaro and Mark & Michelle Minervini.